All datasets are recorded with the same equipment.

Firstly the program Motive:Tracker is started on the laptop and the tracking system is calibrated with a calibration bar. Secondly the recording starts. Therefore an operator is wearing the helmet system on his head and moves to the different areas of interest. The main program is started with the connect button to capture the data.

Then the laserscanner data and the images are obtained. Further from all scenes a video is recorded with an external digital camera to get a first impression.

Five benchmark datasets are available to download. The following table gives an overview of the provided datasets with the name of the dataset, the duration, the number frames per camera and the number of lines from the laser scanner, as well as the number of points of the point cloud.

LS_Dist.txt contains the distances between the laserscanner and illuminated surface:
File content: Internal-Timestamp* | Sensor-Timestamp** | Distances
The distances are in mm.

LS_Dir.txt contains the direction of the points:
File content: Internal-Timestamp* | Sensor-Timestamp** | Directions
The angles are in degree.

rigid_body.txt contains the position of the marker 2 of the rigid body:
File content: Internal-Timestamp* | (Sensor-Position) | (Quaternion: W X Y Z)
The coordinates are in m.

pointCloud.ply contains the 3D point cloud of the scene for visualization in PLY-format.

A large set of data scenes are acquired. Part of them are recorded indoor in a laboratory. In the laboratory it is a typical office environment with a size of 5x7 m². It includes tables, chairs, computers and a lot of clutter. In the video of the scene the room decomposition is easier to visualize. As in a basement, there is very little daylight. Besides the window blinds that are closed and the overhead light that was turned on. The setup of the tracking system in the laboratory causes no problems because the cameras of the tracking system are fixed to the wall.

For the dataset indoor_dynamic the mentioned laboratory room is used. The operator is moving in loops around the room and people are strolling around him.  The scene is recorded to test the ability of the tracking system to measure with people that are temporary recovering the helmet system.

The duration is 56 seconds with 899 frames per camera of the MCS. The laser scanner generates 2333 lines. With 1080 points per laser scan, it results in a point cloud of 2.52 million points. 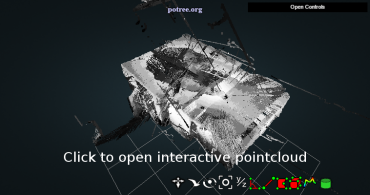 The duration is 63 seconds with 1014 frames per camera of the MCS. The laser scanner generates 2609 lines. It results in a point cloud of 2.82 million points. 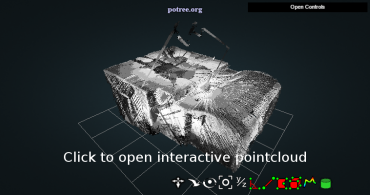 This scenario is outside in an atrium surrounded by facades. Only a part of the atrium is used for the test scenes. This part is on the edge of the atrium without high structures visible inside of the scene. The scene is composed of plants and small concrete blocks. As it is outside daylight is present. This can create problems if the sun is shining because the spherical rigid body markers are less visible for the tracking system. On the day of the recordings it was mostly cloudy.

The following point cloud gives an impression of the scenario:

Download of the high resolution images which are used to calculate the point cloud.

For this scenario the operator is rotating around his vertical axis (static scene). The textured 3D point cloud derived by the laser scanner is shown below. The dataset is recorded for comparing it to the results of a terrestrial laser scanner.

The duration is 52 seconds with 779 frames per and the laser scanner generates 26173lines. It results in a point cloud of 2.35 million points. 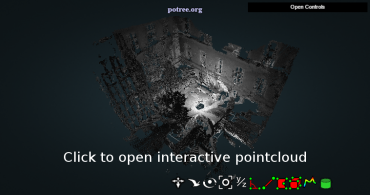 The operator is moving in an outdoor environment (static scene). The movement is not a loop, the operator is strolling from the back to the front and from the left to the right in lines. As the trajectory is not a closed loop, no drift can be calculated. 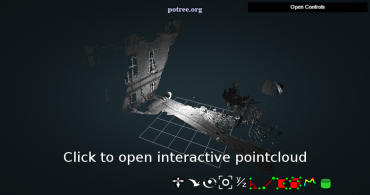 The operator is moving in an outdoor environment (static scene). The movement is not a loop, the operator is strolling arround randomly. As the trajectory is not a closed loop, no drift can be calculated.

For this scene the operator is moving out of the range of the tracking system and is moving around the whole atrium in a closed loop. This scene is taken to test if the system is able to hold the trajectory without connection to the tracking system. It is ensured that the scene contains a closed loop to allow to recognize previously visited areas and afterwards to determinate and reduce the drift of the trajectory.

The duration is 225 seconds with 3176 frames per and the laser scanner generates 7993 lines. It results in a point cloud of 8.64 million points. 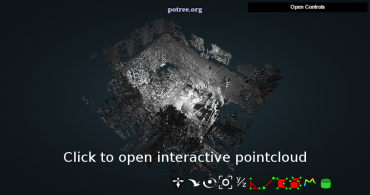